MCT Oil is A Fuel Producer

The body has two primary energy sources; it burns glucose or ketone bodies.  The majority of people consume glucose primarily because they are always supplying a regular form of sugar, starches, and proteins that can be turned into blood sugar.  When one either facts or goes on a low-carb, moderate protein and high-fat diet they switch their energy source to fat.

Specifically, the fatty acids are broken down into ketone bodies.  The primary three forms of ketones that are produced in the body include Acetoacetate, Acetone and Beta-HydroxyButyric acid.  They are released into the blood from the liver when insulin levels are low and hepatic liver metabolism is increased.

Ketones as a Preferred Fuel For the Brain

Ketones are a very different energy making molecule that is made from fatty acids. The human body can make Ketones from stored fat or MCTs. They feed all of our cells of the body, but specifically, they are a preferred fuel for the brain.

Studies have demonstrated that MCT Oils can readily cross the blood-brain barrier (BBB) and be oxidized by the brain. Which means MCTs provide a direct and indirect brain fuel source via the generation of ketones.  This is incredibly important for everyone and those in particular with type 1 diabetic patients as it gives us all a strategy to preserve brain function during hypoglycemic episodes without raising blood glucose levels.

Ketones activate specific regulatory proteins in the brain called brain-derived neurotrophic growth factors (BDNF).  BDNF works to repair, protect and enhance the role of the brain cells and the neurological networks.  BDNF also excites the growth of new, healthy neurons that take the place of older, dying cells.  The failure to regulate dead or dying brain cells is a risk factor for neurodegenerative disease processes.

This is the smallest chain MCT at six-carbon chains.  There is a profoundly small amount of this in our healthy food supply.  It has the potential to cause digestive difficulties including diarrhea and throat burning.

This eight carbon MCT is located in only 6% concentration in coconut oil but is thought to be the gold nugget of the MCTs.  It has the most potent of anti-microbial properties that help to destroy harmful bacteria and yeast.  Caprylic acid is easier than lauric acid in the result of cellular fuel.  In fact, it only takes three steps to turn it into cellular power (ATP).  Sugar takes 26 steps to produce cellular energy and is therefore highly metabolically rich.  The more concentrated an MCTOil is in caprylic acid, the more mitochondrial strengthening the product will be.

This ten carbon chain fatty acid is also a mighty MCT that turns into natural energy within the mitochondria of the cell without any work from the liver.  Capric acid has also been shown to have significant anti-microbial effects against bacteria such as P Acnes, E Coli and Candida albicans.

Research has also demonstrated that capric acid helps to reduce inflammatory activity against bone tissue.  This provides evidence of its benefit in preventing bone loss and osteoporosis.

This is a 12 carbon chain fatty acid that makes up around 50% of the fatty acids within coconut oil.  The metabolism of lauric acid is different than the other three MCTs.  In fact, even though lauric acid is considered an MCT, it acts more like a long-chain fatty acid.  It depends upon liver bile to be efficiently metabolized.

Lauric acid is an effective anti-microbial, but research has shown that caprylic and capric acids are more effective than lauric acid and infectious organisms such as gonorrhea and chlamydia.  Caprylic acid is a common supplement used in anti-yeast protocols and small intestinal bacterial overgrowth protocols 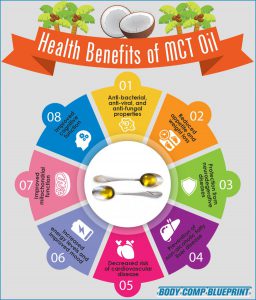 MCTs raise up ketones and lower blood sugar naturally.  They have a stable blood sugar stabilizing effect that helps to reduce inflammation and improve brain function.

After a single oral dose of MCTs, a slight drop in blood sugar develops. It is caused, apparently, by a decrease in the liver output of glucose and not by an increase in the bodies utilization of glucose.

MCTs, improve the absorption of calcium and magnesium in premature infants.  One study looked at 34 pre-term infants.  The children were divided into three groups and fed various formulas.

These same groups were then analyzed for protein absorption and nitrogen content.  The 80% MCT group had substantial improvements in nitrogen absorption and amino acid sparing.  This means the body will be more efficient at preserving and building lean body tissue when using MCTOil.

The production of ketones has important anticonvulsive properties in the brain that have long been used as a treatment for individuals with epilepsy.  The classic ketogenic diet which is LCFA based that is used for anti-convulsive benefits is made up of 87% of the calories from fat.  This is extremely hard to follow, and agreement is often minimal.

The use of MCTs, which as described are highly ketogenic, makes it much easier to get into and stay in ketosis.  An MCT based nutrition plan only depends upon 60-70% of calories from fat which allows one to handle some solid nutrient sources of carbohydrate and protein.  The variety of the food provides more micronutrients, has greater range and is more enjoyable.

MCTs are an elite fuel for athletes or anyone who is performing some physical exertion.  This is due to their fast rate of absorption through the digestive tract, active metabolic conversion into cellular energy and their high energy density.

Many athletes find significant performance benefits using MCTs both pre and post workout.  They are the best form of fat to use right before (within 2 hours) and directly after exercise due to their quick mobilization and use for repairing muscles and blocking the catabolic breakdown of proteins after rigorous training.

Research has shown that MCTs suppress the appetite which helps individuals who struggle with intense cravings and overeating.  In a 14 day study, six healthy males were put on three different unlimited diets:  a little MCT diet, a medium MCT diet, and a high MCT diet.

The study authors found a significantly lower calorie consumption for those on the high MCT diet.  The scientists explained how substituting MCTs for other fat causes can limit excess caloric intake and resulting weight gain.

Some studies had also revealed that when overweight and obese people were put on higher MCTOil diets, they were able to lose more weight and had better energy even though they were consuming fewer calories.