The popular Ayurvedic medicine is advancing its services further in the coming years. The principle of this field of medicine is the use of herbal supplements, plants and techniques other than the pharmaceutical tablets to reduce the effects or completely treat a disease. Ashwa gandha is a similar herb that possesses and offers a variety of health benefits to the human body.

What is Ashwa Gandha? 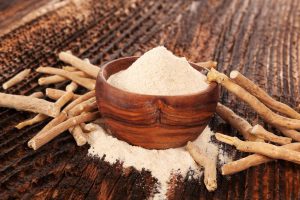 It is a short perennial shrub with a beautiful orange-red fruit in the center which is surrounded by a lively green shaded bell-shaped flower. It belongs to the Solanaceae family (the nightshade family). Its scientific name is Withania Somnifera. The name when split into half means horse-like odor when taken in the literal sense. This depicts Ashwagandha as horse-like powerful and strong herb with a positive effect.

Owing to the vibrant cherry-like fruit of the plant, it is widely known as the winter cherry. Other common names for the herb in different regions include Indian Ginseng and poison gooseberry. This suggests that the herb had both beneficial effect and side-effects as well.

What is the chemical composition of the herb?

The Ashwa gandha herb consists of alkaloids and steroidal lactones. These chemicals are composed of tropines and cuscohygrine. The tropine unit is the building block of an anticholinergic drug named atropine. As far as the steroidal lactones are concerned, the withanolides and withaferin A are the ones obtained from leaves. The Sloan-Kettering Cancer center sums this up by stating:

“The active constituents are thought to include alkaloids, steroidal lactones, saponins, and withanolides. In vitro studies suggest that Ashwa gandha has anti-inflammatory properties which may protect against cartilage damage in osteoarthritis. In addition, improvements in hyperglycemia, hyperinsulinemia, and insulin sensitivity have been detected in the animal model[s] of type 2 diabetes.”