The 3 Real Biological MCTOils: Why lauric acid acts like an LCT, not a real MCT

Coconut oil researchers often say there are about four kinds of MCTOils found in coconut oil: C6, C8, C10, and C12, with the numbers telling you the length of the carbon chains.

Even though scientists long ago decided to call all of these MCTs, biologists now understand that the cheapest and most common of the MCTs, C12 or lauric acid, is a pseudo-MCT.

Lauric acid is an excellent food source, but it acts like an LCT which means long chain triglyceride, not an MCT, so when consumed, you don’t get the fast ketone energy from it that you can get from C8 or C10.

From a scientist’s perspective, the lauric acid should be considered an LCT; unlike the biological MCTs, lauric acid gets processed by your liver. This is important because your body metabolizes MCTs differently than LCTs; MCTs get very quickly converted into energy to fuel your brain and body instead of requiring a pit stop in the liver for processing.

Chemists found the number of carbon chains and then decided what medium was. Lauric acid is a chemical MCT, but it is not a real biological MCT, this is because our bodies do not treat it as a conventional MCT. Almost every study about the human and animal uses of MCTs you’ve ever seen does not measure lauric acid for this reason.

Since your body reacts with lauric acid differently from the beginning, so, therefore, it deserves to be treated on oil marketing labels too! Hopefully, chemists will eventually change the classification to be more accurate. Lauric acid is not an MCT.

Several main types of fatty acid oils are found in coconut oil, but the first three below are the only ones that behave in your body as real MCTs. Which means that they bypass the metabolic burden of processing in the liver, so they quickly become energy in your brain and muscles.

There’s not enough of it to make a difference in straight coconut oil, it tastes bad, and it often results in stomach/gastric upset, but it converts extremely quickly to ketones. If your MCT oil makes your throat burn or has a not so good flavor, and one reason may be because the distillation did not remove enough of the C6, but there are other reasons that this can happen too, which is covered below.

C8 has potent anti-microbial properties which are much stronger than lauric acid, also to help you maintain a healthy gut, and it is the fastest to metabolize in the brain. Your liver doesn’t need to process this rare type of MCT, and it only takes three steps for your body to turn it into ATP, which is the cellular fuel you use. To put it into perspective, sugar takes about 26 steps. This is why Brain Octane is so good at suppressing cravings and is the most potent oil to put in Bulletproof Coffee. You would need 18 tablespoons of coconut oil to get just one tablespoon of Brain Octane.

The second shortest form of MCT, which is also very rare. It is a little slower to turn into energy but is much more affordable than C8. XCT Oil is triple-distilled in a non-oxygen atmosphere without any solvents ever used and contains C10 and C8 because they are the only two MCT oils that turn into ATP without the liver. You would need around six tablespoons of coconut oil to get one tablespoon of XCT oil, that’s how strong it is.

It requires a stop in the liver rather than getting immediately converted into energy like the other MCTs. This is why it is described as an LCT, not an MCT like marketers claim. It can raise cholesterol more than any other fatty acid, which isn’t necessarily a bad thing. It also is commonly cited as having antimicrobial benefits, which it does, except for the shorter chain, MCT oils are more effective against aggressive candida yeast and even gonorrhea and chlamydia (as a monoglyceride). 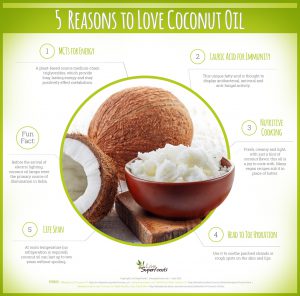 It is a little confusing since coconut oil researchers imply that lauric acid is the same as monolaurin, an extremely potent antimicrobial that is derived from lauric acid. Given how common and cheap this stuff is, it’s no wonder that companies are tempted to sell it as a straight MCT. Two years ago, I looked into making a more affordable MCT oil contains lauric acid. I’d have made a killing selling what is coconut oil as something special, but it only doesn’t work, and it’s not just marketing.

These are widely recognized LCTs, or long chain fatty acids in coconut oil, which are mostly saturated, including stearic acid (C18:0), oleic acid (C18:1), and linoleic acid (18:2). The exact percentage of each depends on the region the coconut is grown, time of harvest, and other evolving variables. They are useful as a fuel source, but they are also widely available in other oils, and you won’t benefit from eating a lot more of them compared to eating straight medium chain fatty acids.

Molecular weight analysis of milk from different species showed that while milk fats from all studied species were primarily composed of long-chain fatty acid (16 and 18 carbons long), approximately 10–20% of the fatty acids in milk from horses, cows, sheep, and goats were medium-chain fatty acids.

Some studies have shown that MCTs can help in the process of excess calorie burning, thus weight loss. MCTs are also seen as promoting fat oxidation and reduced food intake. Interest in MCTs has been expressed by endurance athletes and the bodybuilding community. While health benefits from MCTs seem to occur, a link to improved exercise performance is weak. A number of studies back the use of MCT oil as a weight loss supplement, but these claims are not without conflict, as about an equal number found inconclusive results.